115 million – Highest viewership for a super bowl, ever, in 2015. 98 million – how many views the super bowl had in 2019. These super bowl #s are just to put perspective on gaming viewership since its the highest watched event in america.

99 million – How many people watch the league of legends championship series in 2018. So gaming viewership is near that of the super bowl.

Where can you play?

Arenas. We have arena now in every major city and more are being built. They are huge in other countries but they are coming or here in America!

School. Yep high schools and colleges are forming teams. In fact, you can get a college scholarship for gaming.

What about salary or money?

Top gamers are making 1-4 million dollars per year in salary/winnings. This does not include sponsorship/streaming money o any type of earnings like the supplements given to the top gamers like panax ginseng which helps them to achieve the best in their general health.

DanTDM, a top gaming streamer is estimated to be worth 45 million. So streaming/sponsorships can add significant $$$.

Ninja, a pro fortnite player was paid $1 million dollars to play a new game, Apex Legends, for a ‘few hours’, on release day.

So the money is there.

eSports are growing. Do you play or watch? I do.

How do people learn? Do we have learning styles? What about learning taxonomies? What happens in our minds when we learn? How do we learn from doing, games, virtual reality?

Virtual reality technologies give us the capability to meld computer-generated images and the real world.

But how do we learn from virtual reality and games? What happens in our working memory? This video goes into detail about how we process that information. 3D Learning is a multisensory learning theory which explains how we learn through multiple channels in working memory.

For those new to VR and wonder about why the motion sickness happens, here is an explanation from sciencedaily.com.

“Years ago research showed that the brain can re-set an upside-down view of world to be right side up. Constantly changing images pose a bigger challenge for the brain, which has to deal with ‘lag’: the time it takes the computer system to update and display changing visual images corresponding to the users head movements. This may be a variable linked to motion sickness and other symptoms related to helmet-mounted devices.” 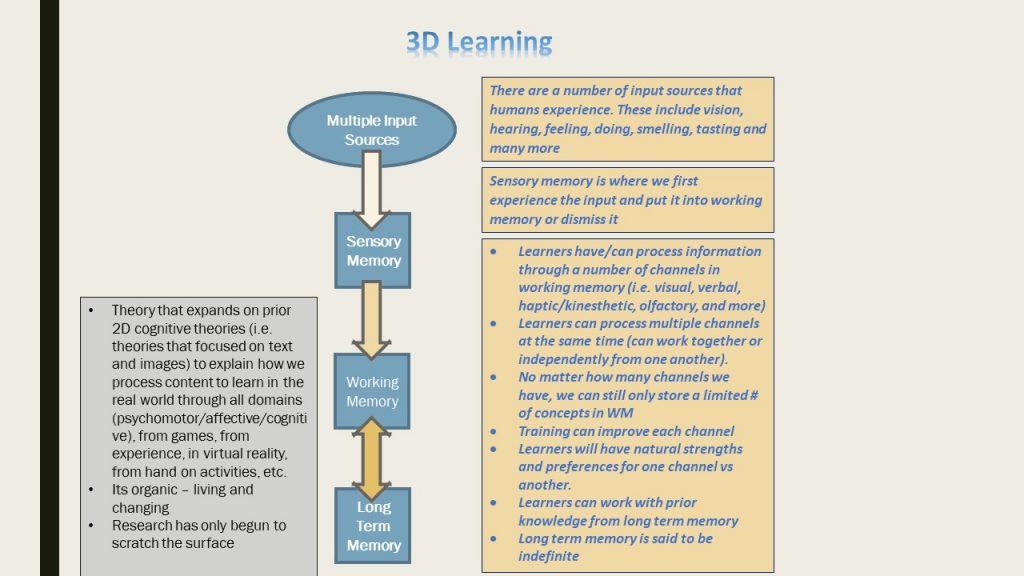 How do we learn? How do we learn while doing? 3D Learning is a multisensory theory that examines how we learn through multiple channels in working memory. This video focuses on a task – learning a song on the guitar.

Working memory is composed of two channels – verbal and nonverbal (visual). Each channel can function independently or they can work together to use information or store it in long term memory.

So I started digging…

Then I started to look at the way we work, play games, use our senses…

And just like that, I realized we have researched some of these other modalities, though that research was rare and scattered. For instance, Jonsson et al (2011, p.1023) state that examining how the senses (i.e. olfactory system) operate in working memory has “received almost no attention in the literature”. Here is a sample of what I found:

4.0 What I realized is that we have been focusing on a very small piece to a very large puzzle!

Why hire an ID for training design? Does ID matter?

I created this guide to help my students write the first draft of their resume. Usually they come to me during their last year, hand me a draft of their resume, and I give them the same initial feedback over and over – and my feedback is usually significant. Once they get the basics down and they have a good working draft, we can start to customize it to highlight their skill set, but this video is the starting point:

It all comes down to learning taxonomies; the order in which we learn. Doing, is a high order task – meaning when you are doing, you are problem solving, thinking critically. Its high level learning. Its our end goal – to be able to problem solve and use (transfer to new situations/jobs). So shouldn’t we just ‘do’ then and bypass other types of learning? Absolutely NOT! Let me explain…

If my end goal was for you to be able to build a car engine, I couldn’t just say ‘go build a car engine’. You couldn’t do it. This is is especially true for learners with little to no prior knowledge. How can I teach you how to build a car engine when you might not even know what a wrench is? You might not know what a spark plug is? You see, I first need to teach you basic information, think factual information where you learn definitions, learn to identify, etc. Once you learn that information, like what a wrench is and what a screw is, you can learn to use the wrench to turn the screw. Now we know how to use the wrench!

Next we learn how to use that wrench to build a section of an engine…but first we need to lean about all of those parts to the engine. You see, this is how we learn. First we learn the basic facts, then we start learn concepts and how to apply that information. Only then can we really start to do! And once we start doing, we start to really learn the ins and outs – problem solving/high level learning! So you see, its not that you learn by doing, you learn many different ways. Learning by doing is how we perceive learning ‘best’ but only because its high level learning.

See video where I explain this further: