I recently obtained an xbox one. After a few weeks of playing around I have found what I believe is an awesome feature with tons of potential in gaming, education, and business. The feature? The Kinect recording feature. Essentially this is basically like an in game DVR service. So when I am playing a game and I do something that I believe is cool I can say ‘xbox record that’ and it will automatically record the last 30 seconds of play and put that away in my stored videos. Now this is awesome because it does not interrupt my gameplay at all. I dont need to press a button, stop playing, or go back and watch a clip later on to choose a part I want to have.

Now how does this apply to business and education? Well in all of my classes there is an archive that is basically a recorded video of the class. The problem? Its 3 hours long each week. Just imagine a student looking for one chunk of information from that class and having to sort through all of that video. Just imagine if during the class the student could place some kind of marker on the class so that they could come back? This would be like taking notes without having to actually take the notes and thus not distract the student from listening. This exact thing could take place during business meetings and such. Now I realize that there are recording devices out there that do this kind of thing but its not seamless and as easy as xbox’s kinect.

Many know that I am a fan of video games so I keep up with these latest rumors. Here is the latest from the xbox 720 and my thoughts on them:

*Release in November – This makes sense. A release for the holiday season seems about right.

*Not be backwards compatible – While I could really care less about this, there are many people that like this sort of thing so supporting it is always a good idea but I understand not doing it if it can reduce the price of the machine for the end user.

This is pretty cool. All you need in an xbox and connect and you can make 3d holograms. Xbox is definitely the most sophisticated gaming and multimedia console out there. Check out the video:

It appears that someone who claims to have a development kit for the next xbox sold it on ebay and it went for over 20k.

Here is the link but keep in mind this will disappear in a few days so I am taking a screen shot as well.

So is this real? No one knows. If it is, this person will probably get in trouble because MS knows who has these. Unless of course it is a publicity stunt by MS, which in my opinion is pure genius. 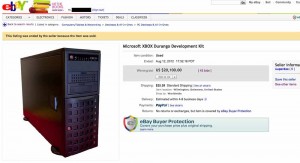 If I get more info, i will post. I really wonder who this buyer was? Was a prototype of the next xbox worth 20k?

Wow, this looks awesome. It will be released as a web-series this fall:

Here is a great link from Wow in school that highlights a bunch of good resources for parents who are concerned about a ‘video’ game being used in their childs classroom. Even my undergrads just think video games are ‘mindless’ entertainment until I show them how games can be used to promote all types of learning objectives while motivating the students. Anyway here is the link: http://wowinschool.pbworks.com/w/page/5268739/Parental%20Involvement

Here is some same sources from the site that I really liked:

Guide to Parental Controls on the XBox 360
http://www.getgamesmart.com/tools/setcontrols/

Powerful Play: A Mom and Son in World of Warcraft
http://www.netfamilynews.org/?p=31128

Why Kids Love Video Games and What Parents Can Do About It
http://www.netfamilynews.org/?p=31146

This is pretty interesting. A document found online, which is now removed via a law firm, has some interesting info about Microsoft’s next console. Here are some of the rumors: