Well this was unexpected. If anything I would have thought Amazon or MS would have acquired Occulus. Needless to say when I first heard facebook was buying this I felt a bit let down but after reading through the many articles on the deal I atually think this might be a good thing. Maybe facebook was the right company to buy it. Here is a good article which describes some of the good/bad things about the acquisition:

I am currently waiting for the next generation of Occulus to arrive this summer – I have it on pre-order!

I had the chance last night to try out Occulus Rift in my Gaming and Simulation class and thought I would share my thoughts. Keep in mind I only had the opportunity to try it one time as did each of my students. Here are my thoughts:

Its awesome, there are tons of possibilities for it, I am really excited for it, but there is still a glitch in VR tech.

So….its awesome. It has a tons of cool demos, that come with it, so that you can test the technology and its really fun to go through them. You really feel like you are in a virtual world. You can look around, move around, etc. in these virtual worlds. Some of these demos are fun and some are geared towards education.

When you first look at the goggles, you notice that there are two eyes, rather than just one screen, in the unit. You also need to put ear phones (really ear plugs) on to get a better effect. The unit is very light though, you dont even notice it is on except for the wires and I am sure they eventually come out with a wireless one.

There are tons of possibilities for the technology. I am most excited for this to use Kinect technology so that your whole body can be used with the VR screen.

There is one glitch that is slowly being solved – you can get motion sickness from it. I did after about a minute and when I took the goggles off I felt like I had just been on a roller coaster ride. Other students felt the same way after using it but I was one of the only ones that got motion sickness while using. Apparently the motion sickness goes away as you get used to the technology. This is why VR technology failed in the 90s. Apparently they are still working on this issue though and believe they have a solution. It should also be noted that I used an older version of the occulus rift – they have an even newer version out now, which solves this problem even more. This problem, in my opinion, will make or break this technology as it just wont be used on large scales if people get sick from it. But my fingers are crossed that it gets solved.

If you are interested in purchasing this, its only $300 for the developer kit, which is a beta version of the technology: http://www.oculusvr.com/

Here is a picture of me in the goggles during my class: 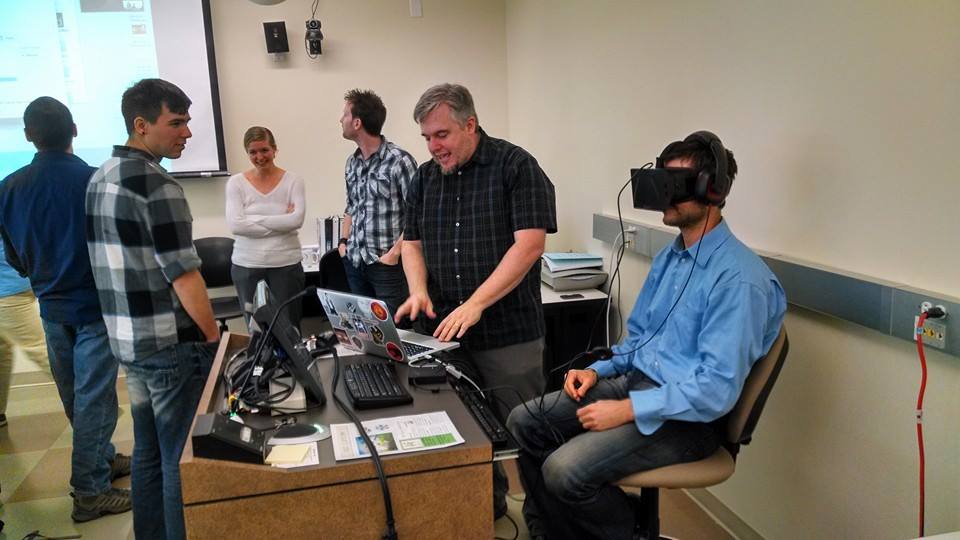 It has the potential. We tried it in the 90s but it never panned out as people kept getting sick from 3d and the tech just wasnt there. Occulus rift might just be the answer. Check out the video: